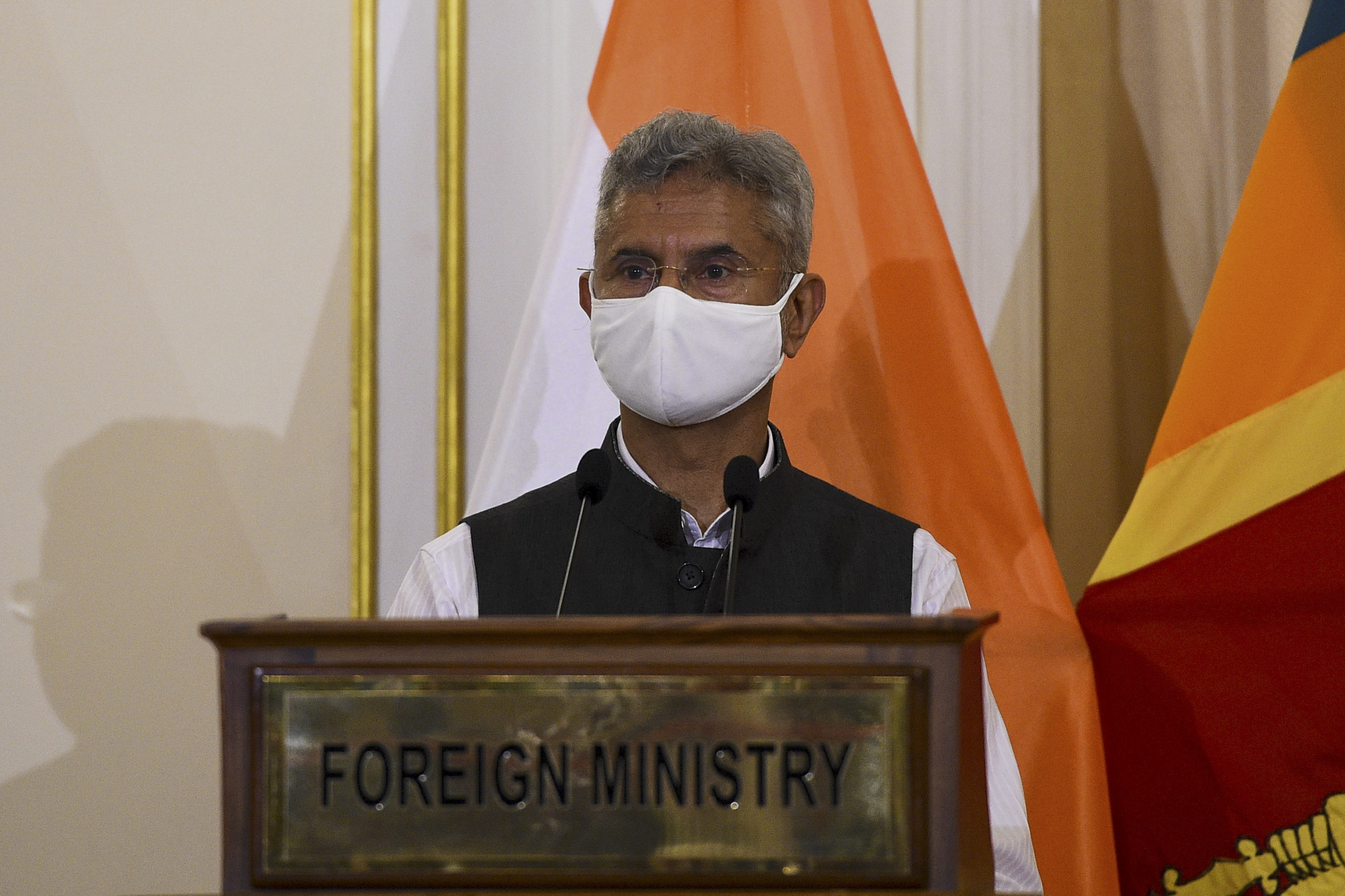 India’s foreign minister studiously avoids naming China directly, but Beijing looms large behind his explanation of why the EU and India decided on Saturday to have another shot at resuscitating moribund trade talks, which collapsed in 2013.

For Subrahmanyam Jaishankar, supply shocks during the coronavirus pandemic have starkly exposed Europe’s import security problems, as well as India’s. But when asked whether he was alluding to an overreliance on New Delhi’s giant rival across the Himalayas, he sidestepped any reference to Beijing and described Europe’s move to resume trade talks with India, in more general terms, as a big hedge bet.

For Europe, the most pressing concerns about supply chains during the pandemic have centered on overdependence on China for technology and medical equipment. A European Commission communication last week said 52 percent of the products in “sensitive ecosystems” where Europe is highly dependent came from China.

Jaishankar warned that these strategic worries would not necessarily disappear after the pandemic, but should be treated as a new normal. “We have to restructure the world, reengineer the world, taking a pandemic kind of situation as a constant.”

Even with Europe’s need to diversify from China, there is no guarantee that EU-India trade negotiations will prove successful at the second attempt. Jaishankar, who has previously described these talks as potentially the world’s “most difficult” negotiations, conceded that they would not be concluded “overnight,” but said there was now, finally, a “more than decent possibility” of success.

The Europeans have frustrating memories from eight years ago when they failed to break down barriers to India’s highly protected markets for cars, agriculture and liquor. But Jaishankar, a former ambassador to Washington and Beijing, said there was now a new dynamic. “The politics is changing. I would say the chemistry of it is changing.”

China is, once again, the unspoken dimension in that shifting chemistry.

EU countries last month signed off an Indo-Pacific strategy that aims to project great European influence in an area where China is the superpower.

Jaishankar welcomed this EU attempt to view the region beyond the trade lens and move toward joint projects in the defense, infrastructure and digital sectors. He noted, however, that Europe still had more to do. “We would certainly like to see a more active and visible EU presence in the Indo-Pacific. Now whether that happens collectively or individually is something for the EU to work out.”

While, for example, European countries have promised a “meaningful” naval presence in the region, it is unclear whether any EU country other than France is prepared to commit serious firepower to the region.

As ever in trade relations, Europe’s two priorities are agriculture and cars. In both of these spheres, India has proved a very tough nut to crack.

On cars, India has 125 percent tariffs, and New Delhi has faced international flak for using high manufacturing tariffs along with its “Make in India” industrial program to try to boost domestic production rather than opening up to imports from the U.S. and EU. India’s farmers are also a sensitive constituency. They are already filling the streets in major protests over domestic reforms, and would almost certainly oppose disruption from imports from European food producers.

Jaishankar, however, dismissed these two as obstacles to a deal. When asked whether farmers and cars made India as unlikely to strike a deal now as in 2013, he said that was “obviously wrong … If that were the case, we could not have convinced the Commission and the 27 leaders that they should resume the discussion.”

India’s announcement of a diplomatic rapprochement with the EU has been one of the few pieces of positive news for Prime Minister Narendra Modi, who is facing intense political pressure over his handling of the devastating second wave of the coronavirus pandemic in his country. Daily deaths have surpassed 4,000 and the prime minister is being criticized for allowing election rallies and a major religious festival, which are now feared to be superspreader events.

Jaishankar insisted he was “not in denial” about India’s approach, but argued that variants had been more virulent than expected and that mathematical modeling — both Indian and international — had not predicted such an explosion from 10,000 cases a day in February. India is now reporting more than 400,000 cases per day.

“It’s very easy to say, ‘our guard should have been right up there,’ at 10,000 a day — the fact is that every society has this problem. When the numbers drop, there is a social attitude which goes with that.”

Jaishankar made a renewed appeal that European opponents to the vaccine waiver should change their minds, but conceded patents were only a part of the puzzle.

He stressed one of his more immediate battles was the internal debate in India about accepting foreign aid again after not doing so since 2004. The minister made no apology that his priority was to now work with the international community.

“The politics is: ‘Oh, now you’re taking foreign aid. It’s against our policy to take foreign aid.’ Look, I am in the middle of COVID. I’ve never seen anything like this in my life. This is not the time for pride and precedent and political argumentation, if somebody is sending stuff which is relevant to COVID treatment, and I must say the EU has been very forthcoming in this regard.”

When asked about India’s moves to censor some Twitter accounts in relation to the coronavirus epidemic — which has sparked concerns about deterioration of freedom of speech in India — Jaishankar said the move had been needed to safeguard public health.

“A lot of the Twitter accounts which were blocked were people who said: ‘Don’t wear masks,’ ‘Don’t take vaccines,’ who were criminal in their outlook, so who were sowing panic by posting fake photos.”

She left politics to drive a garbage truck

Spain announces reopening of border with Portugal (without...

Belgian prince tests positive for virus after party in...

WHO pauses study of hydroxychloroquine in global trial