Northrop Grumman kicked off their 2021 launch manifest with the flight of an Antares rocket… The post Northrop Grumman’s S.S. Katherine Johnson arrives at the ISS appeared first on NASASpaceFlight.com. 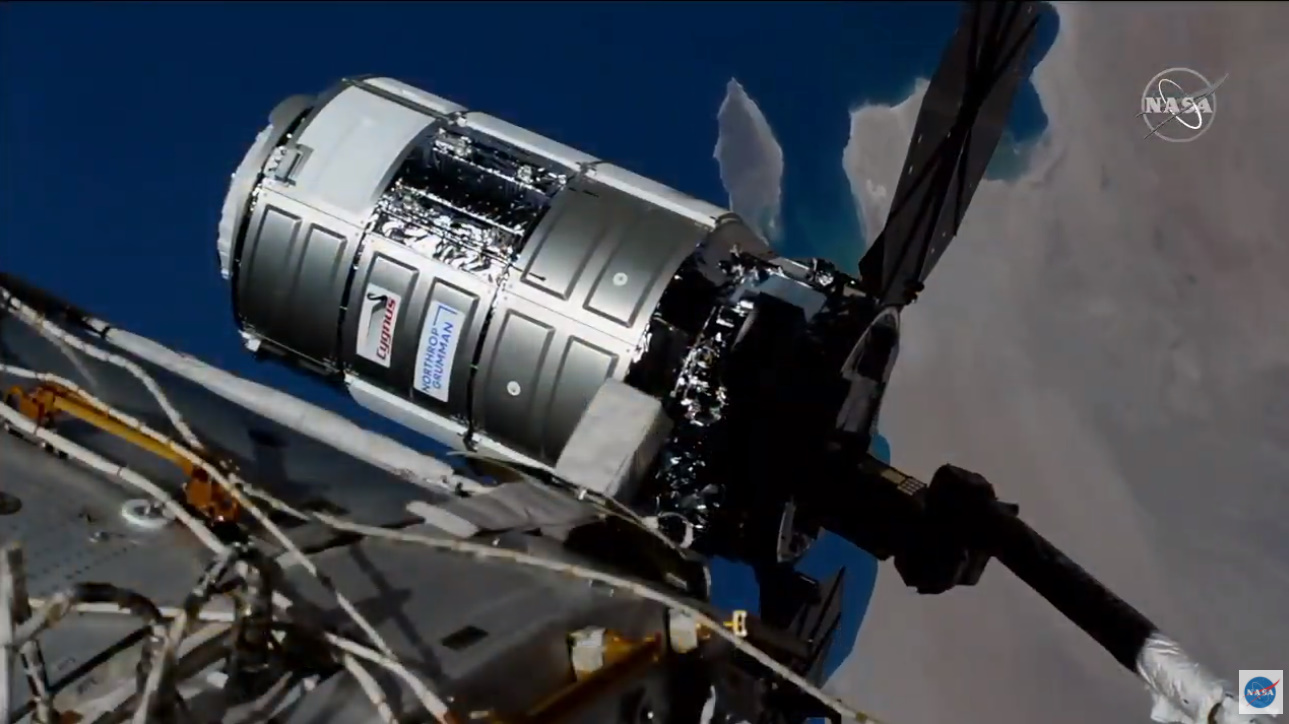 Northrop Grumman kicked off their 2021 launch manifest with the flight of an Antares rocket delivering the Cygnus spacecraft to the International Space Station from Pad 0A at the Mid-Atlantic Regional Spaceport (MARS) on Wallops Island, Virginia at 12:36:50 EST (17:36:50 UTC) Saturday, 20 February 2021.

The spacecraft then conducted a rendezvous with the Station two days later, where it was berthed to the Unity module using Canadarm2.  This uncrewed resupply mission delivers 3,729 kg to the ISS, consisting of CubeSats, science experiments, Station equipment, and crew supplies.

Production for this particular flight began a little more than two years ago with the start of long-lead material purchases and integrated components needed for the Antares rocket and Cygnus spacecraft.

While overall production and integration of an Antares/Cygnus mission can take place on a shorter time span, Kurt Eberly, Director Space Launch Programs, Northrop Grumman, related that the additional time is built-in not just for production delays but also to accommodate the potential of NASA requesting an advancement to a launch date, which has happened before.

After integration with the Cygnus spacecraft and initial cargo load operations in the horizontal integration facility for this mission were complete, the entire Antares 230+ vehicle and payload were rolled to the launchpad on 16 February, where the entire rocket was taken vertical for pad checkouts and Wallops Range communications checks.

Once late-load was completed, Cygnus’ hatch was closed for flight and the payload fairing pop top was reinstalled before the rocket was taken vertical for final launch operations.

Temperatures are predicted to be in the low-to-mid 30s Fahrenheit (0 – 2.7 ℃), within Antares’ operational range that allows for temperatures as cold as 20℉ (-6.6 ℃) at liftoff.

After leaving the pad, Antares pitched and rolled onto a southeasterly trajectory to begin its chase of the International Space Station.

Following first stage shutdown and separation, the payload fairings deployed while the guidance system converged on a flight solution to place Cygnus into the correct orbit while also performing a series of energy scrub maneuvers to bleed off excess energy from the solid propellant upper stage (a detailed overview of how that process works can be found here).

That Castor 30XL stage then finished the orbit insertion, delivering Cygnus into the Station’s orbital corridor for a two day rendezvous ahead of grapple and berthing on Monday, 22 February.

After arriving in orbit, Cygnus’ large batteries do not mandate the immediate deployment of its solar panels, a process that will unfold over the first 90 minutes of flight.

The spacecraft’s hydrazine thrusters provide attitude control to keep it facing the Sun for power generation while reorienting the craft as needed for larger burns of the bi-propellant main engine to change the vehicle’s orbit as it approaches the Station. 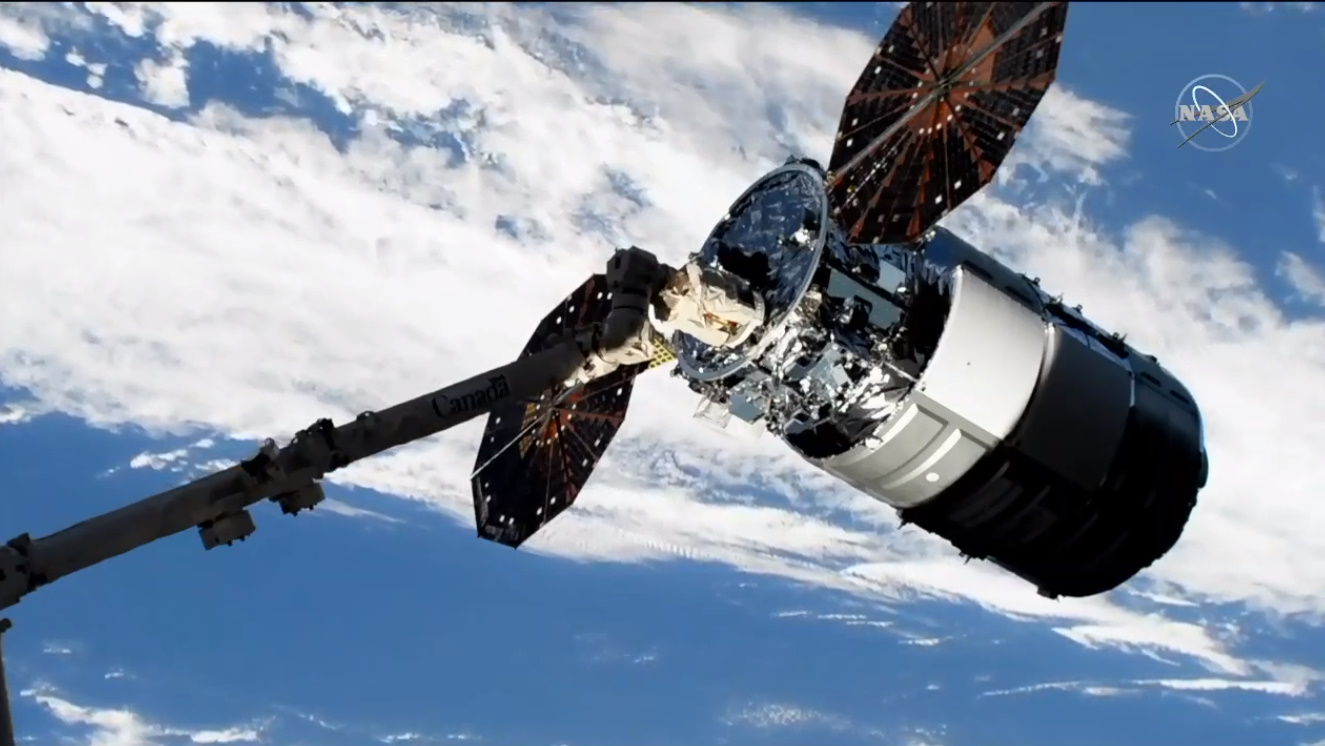 Canadarm2 grabs hold of the Cygnus NG-12 spacecraft as it arrives at the ISS. (Credit: NASA)

After being installed onto Node-1/Unity, Cygnus can also serve not just as a cargo vehicle but as an additional scientific module for the Station to accommodate additional experiments or overflow during heavy science periods.

Frank DeMauro, Sector Vice President and General Manager, Tactical Space Systems at Northrop Grumman, said “That service is available.  We did a demonstration on one of the earlier missions, and since then NASA has taken advantage of that capability where they actually have crewmembers in Cygnus running science experiments in our module.”

Mr. DeMauro wasn’t sure if that element would be utilized on this flight, but he stressed it is available to NASA on all Cygnus missions, and the agency does not have to request the capability prior to liftoff.

“The capability is there,” related Mr. DeMauro.  “So if NASA decides to move an experiment into Cygnus, they can plug it into ports in the cargo module and use it as another test lab.”

As part of the mission’s scientific objectives, Cygnus is carrying numerous CubeSats and ThinSats that will be deployed after the vehicle completes its approximate two month mission at the Space Station.

All of the current satellites to be deployed from Cygnus after it departs the Station are launching aboard the craft as well, though NASA and SlingShot could potentially add additional CubeSats as the months progress.

In regard to the ThinSats, Kurt Eberly said, “We launched some of those previously.  And these are little STEM satellites, and this is in cooperation with our spaceport, Virginia Space.  And the idea here is to take advantage of extra performance on the vehicle when it occurs and carry along these student-built and designed satellites.”

“We’re really excited about this, and it’s a shame that with the pandemic we can’t have the kids out here for the launch.  When we did this before, we had a bunch of the high school students out here with some of their teachers, and it was just awesome to see how excited they got to think about how something they designed was going to be in space.”

While the students will not be able to attend the launch, data collected by their ThinSats will be made available to them in their classrooms.

Additionally, a wide variety of scientific research is flying onboard NG-15, including worms, a Protein-Based Artificial Retina Manufacturing system, experiments to map astronauts’ dreams, a powerful computer system, an upgrade to the Environmental Control and Life Support System for the Station, and a protein grower.

The Micro-16 experiment will aim to better understand the cause of muscle weakening experienced in astronauts in microgravity even after working more than two hours every day to prevent bone and muscle loss caused during long-duration missions.

The experiment will measure the muscle strength of C. Elegans worms to test whether decreased expression of muscle proteins is associated with decreased strengths.  “Results from this study could provide insights into mechanisms causing muscle strength decline in the elderly since physiological changes occurring in spaceflight mimic accelerated aging,” said Dr. Siva Vanapalli, Professor of Chemical Engineering at Texas Tech University.

“These results may support new therapies to combat the effects of age-related muscle loss on Earth and can help us further understand how humans cope in the absence of gravity as we plan to go beyond Earth on longer duration crewed missions.”

Building on their previous experiment sent to ISS in 2018, LambdaVision’s Protein-Based Artificial Retina Manufacturing project will evaluate a manufacturing system to test the effectiveness of microgravity for production of light-activated protein retinas that might be able to replace the function of damaged eye tissue and can assist those on Earth suffering from retinal degenerative diseases.

Meanwhile, the European Space Agency’s Dreams experiment will examine why astronauts have often reported getting a better night’s sleep during their stays aboard the Station than on Earth.  The crew members will use themselves as test subjects, donning a sleep monitoring headband.

Additionally, the Real-Time Protein Crystal Growth 2 experiment will produce high-quality protein crystals that will undergo detailed analysis back on Earth after returning on a future SpaceX Cargo Dragon 2 spacecraft.  Astronauts will check the crystals, report their growth, and then make changes based on initial observations.

Microgravity produces high-quality protein crystals that can be analyzed to identify possible targets for drugs in the treatment of diseases; however, it is difficult to analyze protein structures on Earth because gravity interferes with the optimal growth of protein crystals.

Aside from the bio-medical experiments onboard Cygnus, the craft is also carrying a new high-performance computer called Spaceborne Computer-2.  This experiment will test  off-the-shelf systems that can process data faster in space by employing artificial intelligence capabilities as well as in-situ data processing on Station, eliminating the need to send the data to Earth for analysis.

Additionally, the Station’s Environmental Control and Life Support System (ECLSS) will receive an upgrade in the form of Exploration ECLSS: Brine Processor System.

This device will increase water recovery and recycling efficiency on the Station from the current 93% level to 98%.

Current systems on the Station recover 93% of water and water vapor, but Exploration ECLSS: Brine Processor System will increase that by recovering additional water from the Urine Processor Assembly.

This upgrade feeds directly into longer-duration future spaceflights, which will be required to achieve 98% water recovery.

It is Northrop Grumman’s tradition to name each Cygnus vehicle after someone who has had a pivotal role in human spaceflight.  This flight is named in honor of NASA mathematician Katherine Johnson, an instrumental figure in ensuring the safety of early U.S. human spaceflight missions from Freedom 7 onward to Apollo 11. 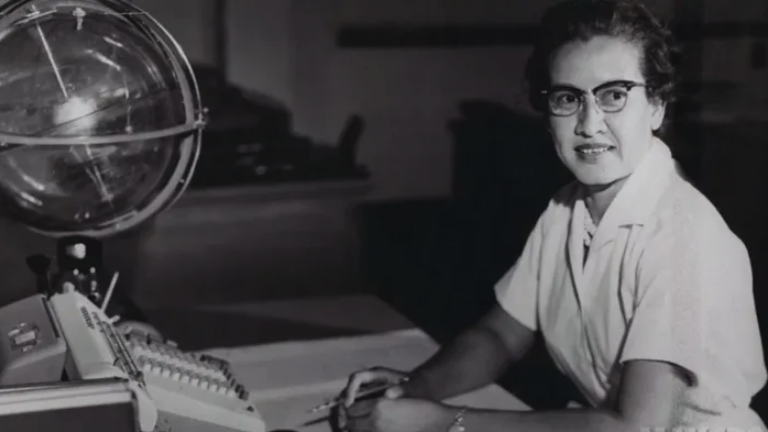 Johnson graduated from West Virginia University with degrees in Mathematics and French at just 18 years old and became the first black woman to attend graduate school at the same university.

During her time in the Space Task Group, Johnson performed the trajectory analysis for Alan Shepard’s Freedom 7 mission in May 1961, the United States’ first human spaceflight.  Johnson also co-authored a paper on orbital spaceflight and landing, becoming the first woman to receive credit as an author of a research paper at NASA.

Johnson is most well-known for her work behind John Glenn’s orbital mission, which launched exactly 59 years ago today (20 February 1962). 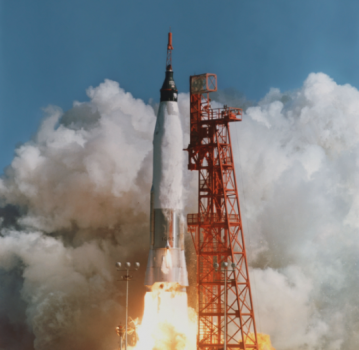 Friendship 7 launches. The mission is some of Johnson’s best-known work. (Credit: NASA)

Glenn specifically requested that Johnson run the computer’s calculations by hand to proofread its work, saying “If she says they’re good, then I’m ready to go.”

Johnson went on to contribute valuable calculations for the Apollo 11 lunar landing and authored or co-authored 26 papers during her time at NASA.

In 2015, at age 97, she was awarded the Presidential Medal of Freedom by President Barack Obama, the highest honor for a U.S. citizen.

Speaking to the decision to name this mission in honor of Johnson, Kurt Eberly said, “In rocketry, in spaceflight, we are standing on the shoulders of those who came before us.  And when our students learn orbital mechanics and how to calculate trajectories in college, and then they run a computer program, it seems second nature.”

“But really it’s built on the hard work of all those people like Katherine Johnson that came before us and developed the methodologies for figuring out how a rocket needs to fly through the atmosphere and get to orbit.”

“The fact that we still rely on humans to this day to put together these trajectories and fly these missions, she represents that capability that the best of us have.”

Question: would you rather be on the beach or would you...

Planetwide Storms May Have Filled Lakes, Rivers on Ancient... 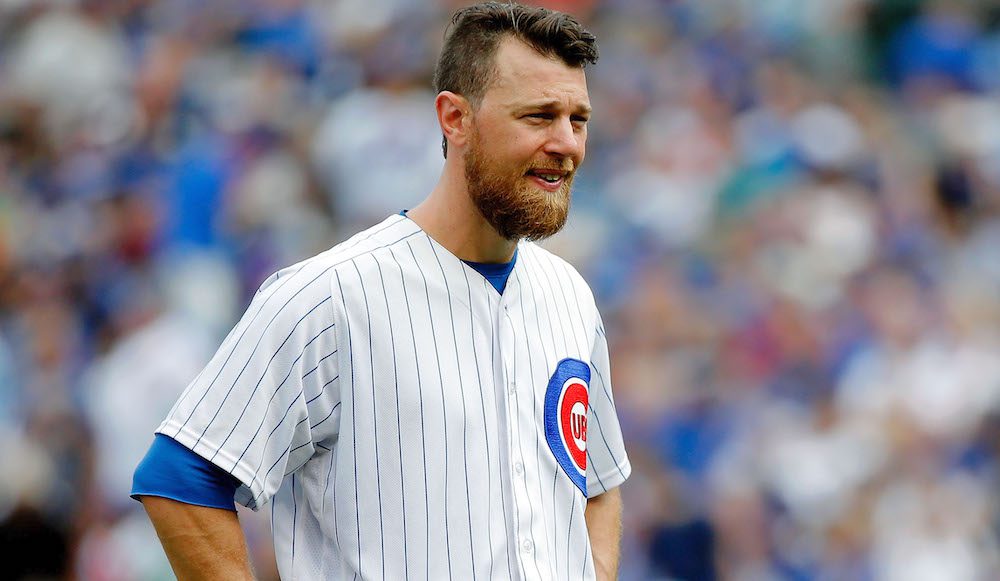 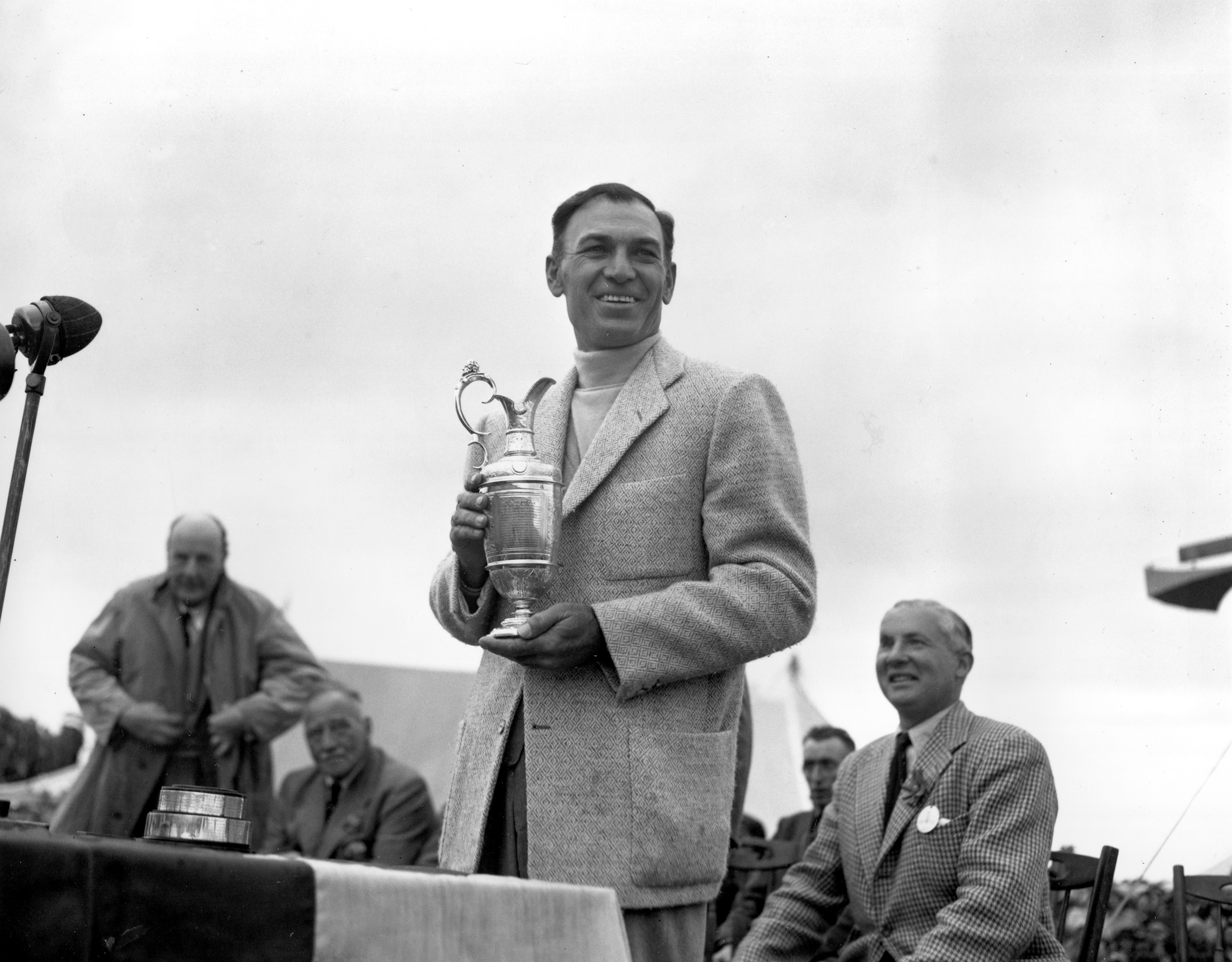 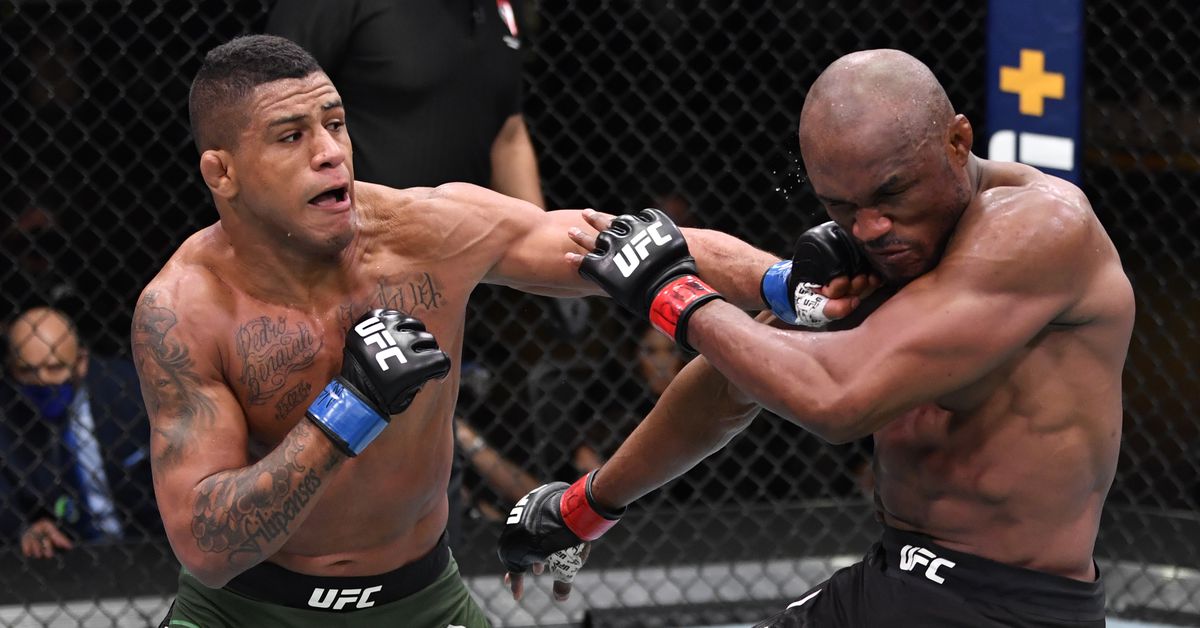 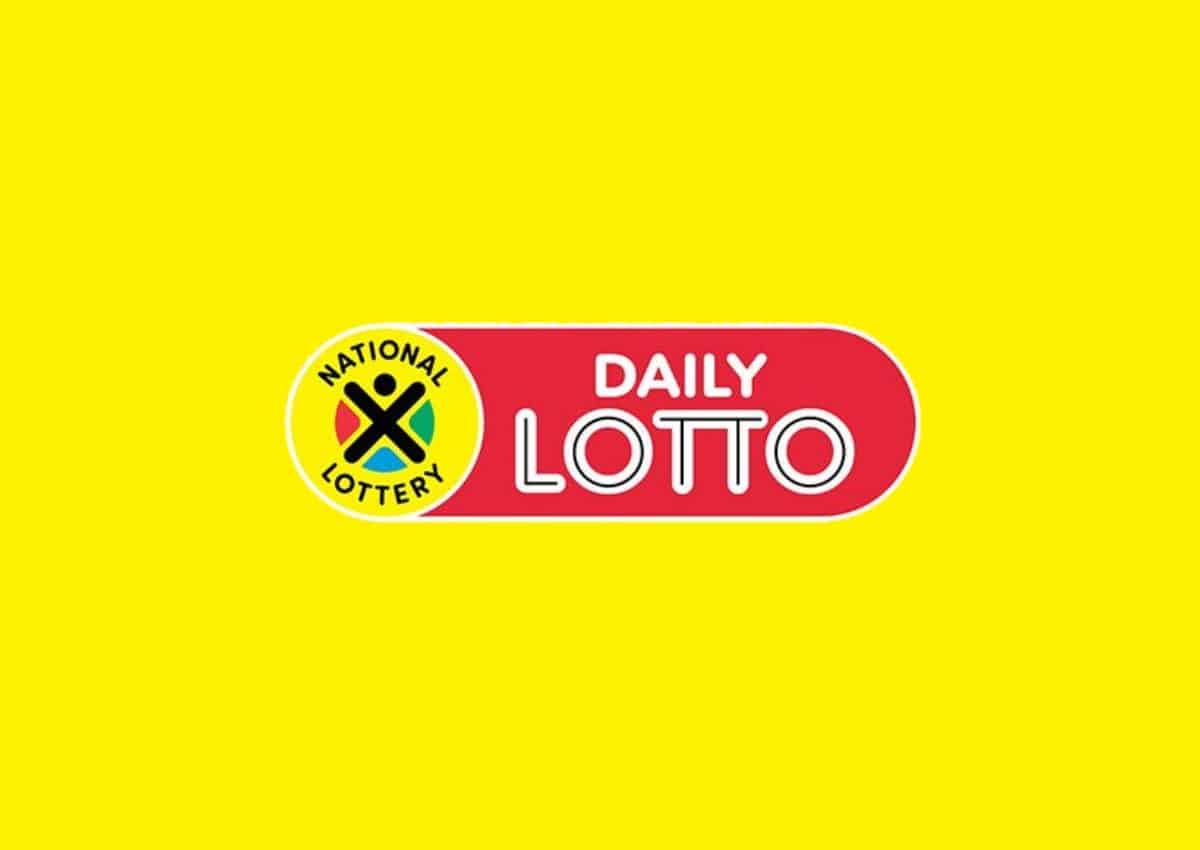 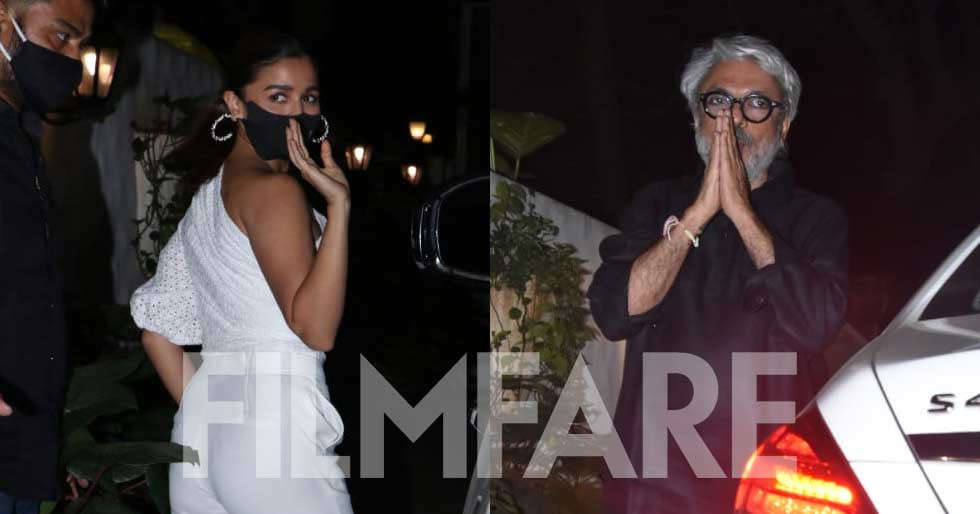 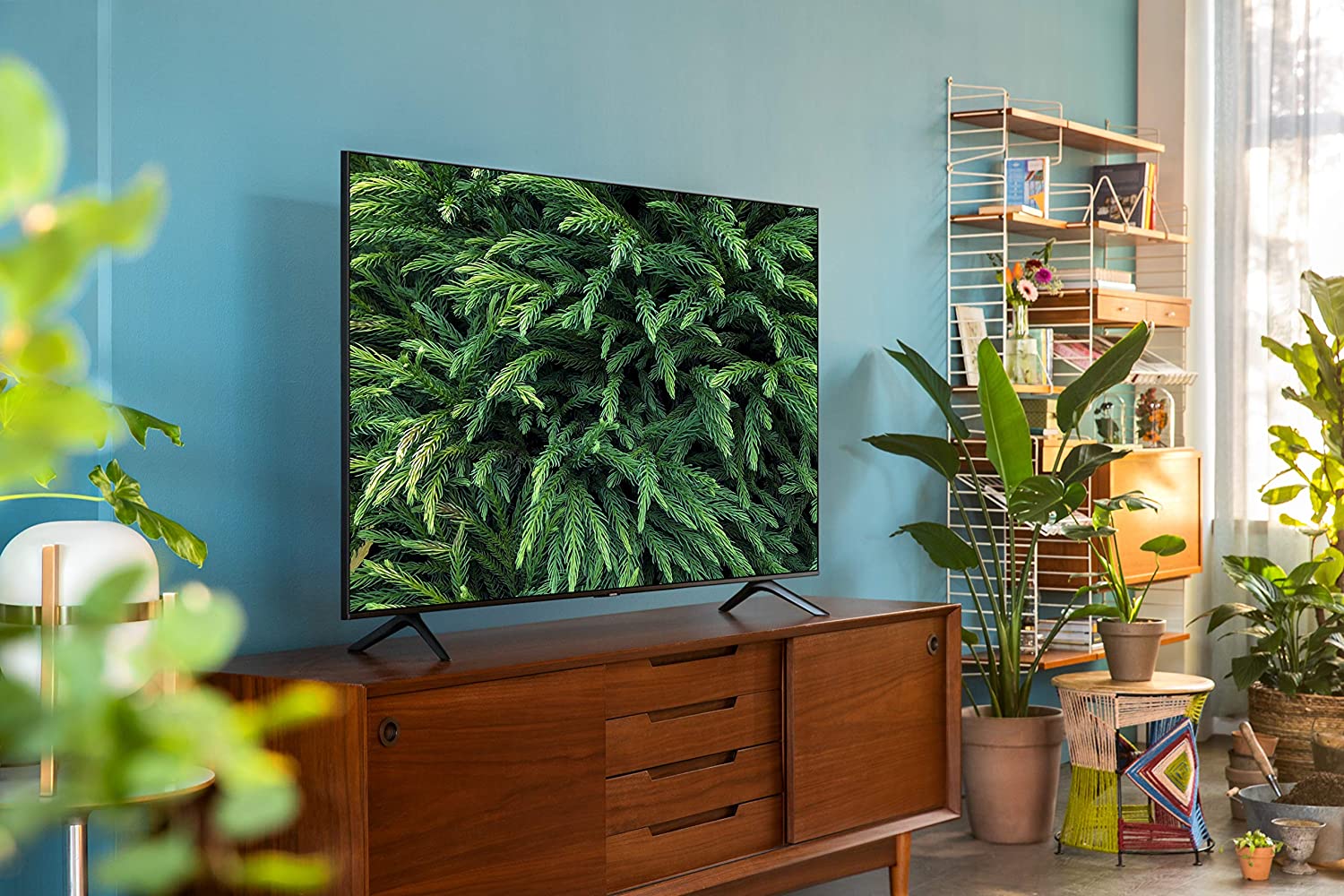