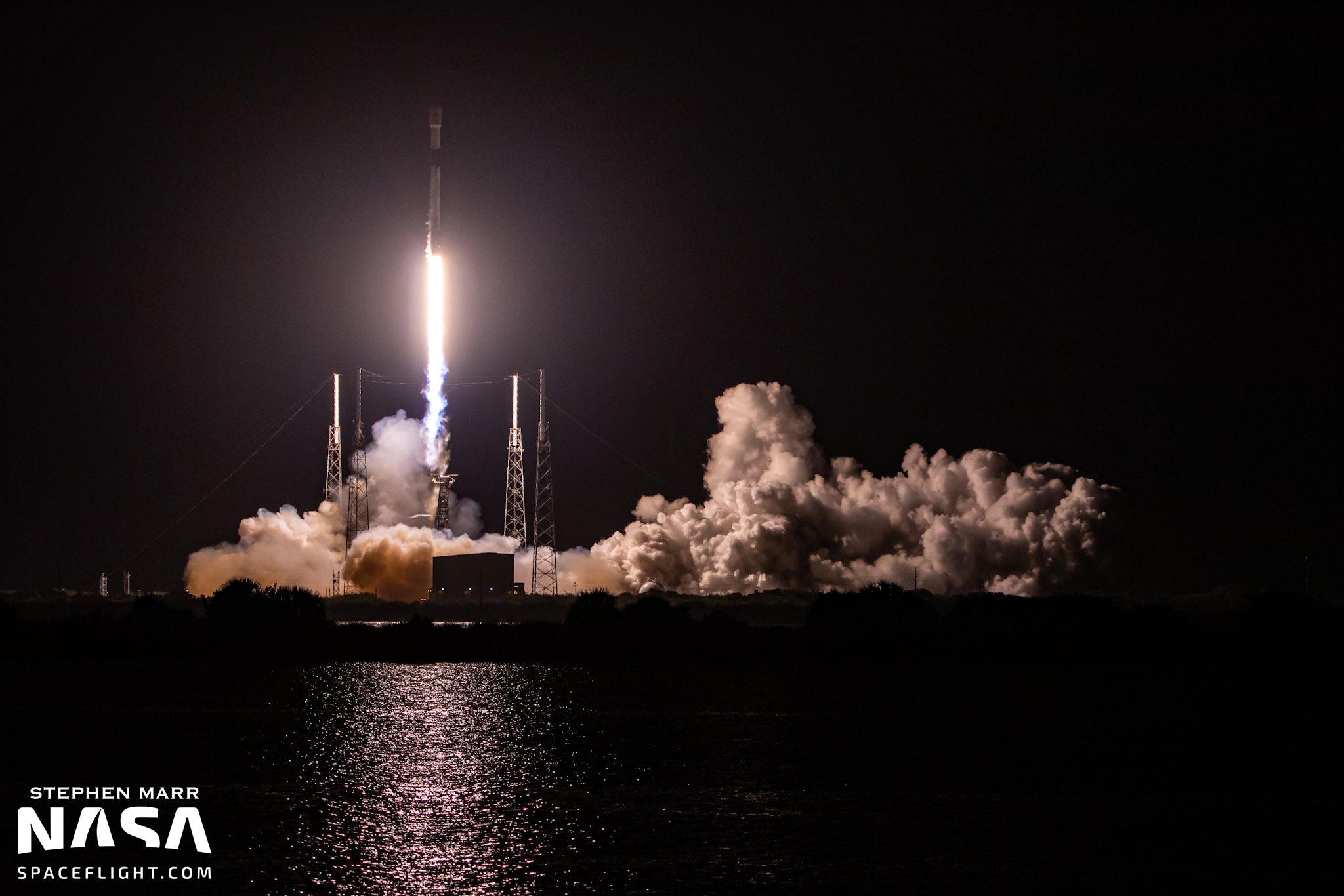 SpaceX conducted the historic 10th flight of a Falcon 9 rocket booster on the Starlink V1.0 L27 mission Sunday. The mission launched from SLC-40 at Cape Canaveral Space Force Station on 9 May at 02:42 EDT / 06:42 UTC with an 80% positive launch weather and a “low risk” for recovery weather.

Starlink is SpaceX’s global internet constellation which aims to deliver fast, low latency, and inexpensive internet to locations where ground based internet is either unreliable or completely unavailable.

SpaceX is currently filling the first shell of Starlink located in a 550 km circular orbit with an inclination of 53 degrees. Once complete, the first shell will consist of 1,584 operational satellites across 72 orbital planes with 22 satellites per plane. Prior to this mission, the shell contained approximately 1,456 operational working satellites, of which about 882 are in their final orbit, meaning this is the third-to-last Starlink launch before all Starlinks for the the first shell are in space.

However, it will take a few months for all of the first shell satellites to reach their operational orbits; once that occurs, Starlink will cover approximately ~80% of Earth’s surface.

Once all the satellites in the first shell are in orbit, SpaceX will begin building out additional orbital shells that will increase bandwidth and achieve 100% global coverage thanks to some satellites in polar orbits.

Overall, the first phase of the Starlink constellation will consist of approximately 4,408 satellites, in the following shells:

Booster B1051 is the second oldest operational first stage booster in the Falcon 9 fleet, debuting in prominence with the uncrewed Demo-1 flight of Crew Dragon to the International Space Station on 2 March 2019. During its life, it has flown the following missions:

This was the first time an orbital class rocket booster flew 10 missions and marked a critical reuse milestone for SpaceX.

On 30 March 2017, SpaceX reused a Falcon 9 booster for the first time when SES-10 launched from LC-39A at the Kennedy Space Center under the power of core B1021, which a year prior became the first booster to land on SpaceX’s floating platform Of Course I Still Love You. 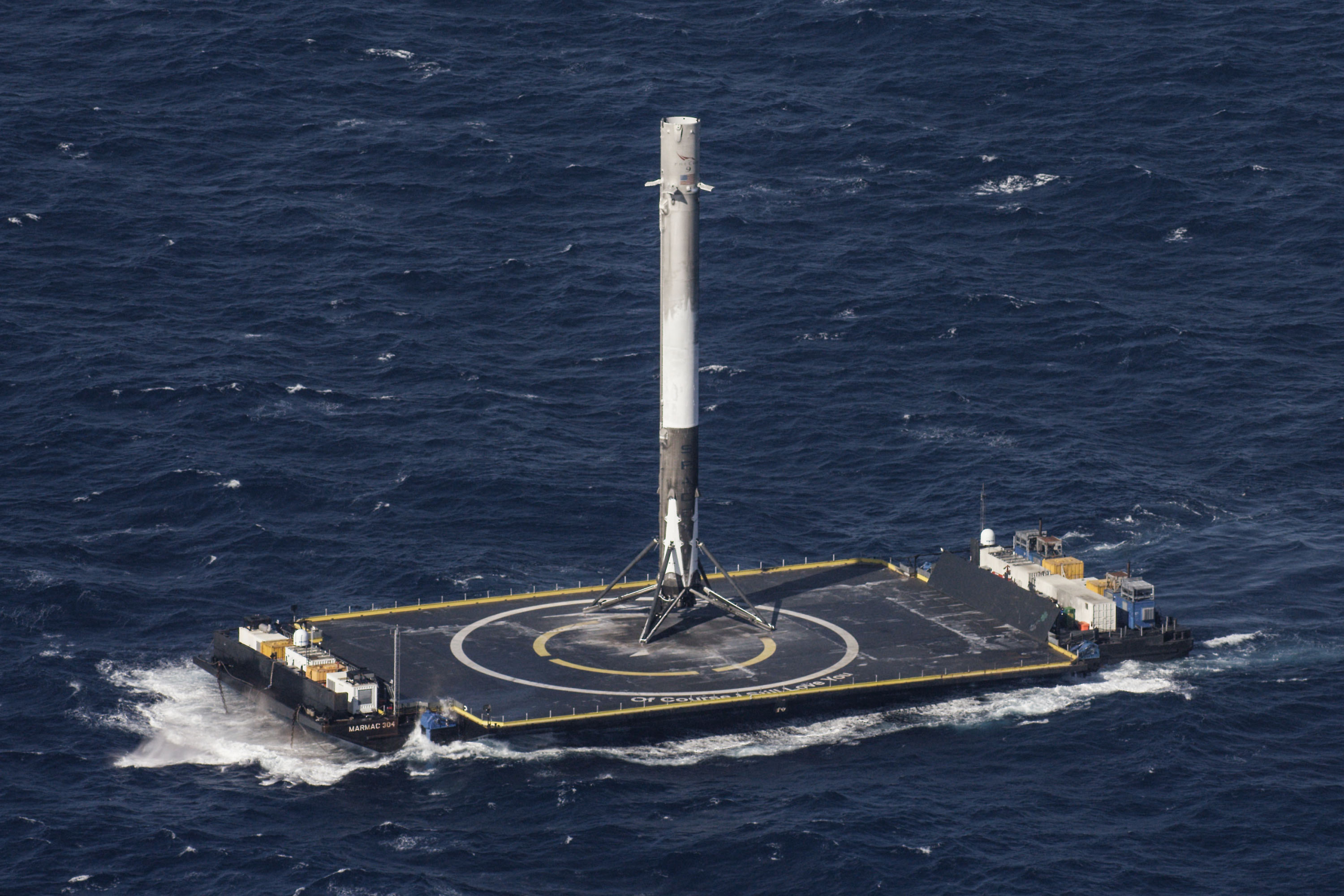 B1021 on Of Course I Still Love You after landing (Credit: SpaceX)

In May 2018, SpaceX debuted an upgraded Block 5 variant of the Falcon 9. This new version was to be capable of carrying crewed missions and take lessons learned from previous blocks to decrease turnaround and refurbishment time; the company set the ambitious goal of reusing a booster 10 times with minimal refurbishment between each flight.

Since the first flight of Falcon 9 Block 5, SpaceX has transitioned from simply manufacturing Falcon 9 first stages to operating a fleet of reusable rockets. Although the company still manufactures new boosters, they are becoming increasingly rare to see on the launch pad; in fact, not a single new first stage has launched so far in 2021.

Over the years, customers have become more and more comfortable flying on reused rockets. The United States Space Force recently allowed key national security missions to fly on used hardware, and even NASA has accepted flown boosters on crewed missions, the first of which launched several weeks ago on the Crew-2 mission.

SpaceX just launched B1051 for the tenth time! It was a beautiful night for a Starlink launch and, yes, a landing on JRTI downrange. My view of the launch from the Titusville Marina where dolphins were playing. (Yes, I believe in lucky dolphins.)
Article: https://t.co/7x43LbIR1I pic.twitter.com/N3h3IzuZGE

In December 2020, Sirius-XM became the first paying customer to use a “high-flight number” booster when the SXM-7 satellite successfully launched on the seventh flight of booster B1051.

Thanks to their homegrown internet constellation, SpaceX has been able to expand the envelope of recovering and reusing hardware. With an abundance of internal payloads to launch, the company has been able to reduce turnaround times and launch individual boosters more and more without risking paying customers’ payloads.

This is evident in the number of times a booster has flown before each launch:

SpaceX has also drastically reduced the turnaround times in 2021. Before this year, the fastest turnaround of a Falcon 9 was 51 days, between Starlink L11 and Starlink L14 — itself a global record.

In 2021, SpaceX has so far beaten this record six times, with two turnaround times at just 27 days. The average turnaround time has also decreased by approximately 48% since 2020:

Prior to launch, no static fire test was conducted, continuing a trend among SpaceX’s internal Starlink missions to skip the static fire and proceed to launch.

Since Starlink V1.0 L8, 14 Falcon 9 flights have not required a static fire test due to both the reliability of flight-proven first stage boosters and the majority of those missions being internal Starlink flights.

For external missions, paying customers can request a static fire before launch.

After lifting off, the vehicle performed a pitch and roll maneuver to place itself onto the correct heading and into the proper orientation to achieve a 53 degree orbit of the Earth. Falcon 9 achieved MaxQ 1 minute 12 seconds into flight, followed by staging at T+2 minutes 36 seconds.

The second stage then ignited as the first stage oriented itself for its 10th reentry and landing.

Over six minutes into flight, the first stage reignited its center engine, E9, shortly followed by two outer engines, E1 and E5. These three engines contain TEA-TEB canisters, allowing them to be relit in flight, which is different from how the engines are ignited on the ground before liftoff. On the ground, the TEA-TEB is provided by the launch pad’s ground service equipment.

Shortly after, the first stage then lit E9 again to land on the Just Read the Instructions droneship approximately 615 km downrange.

This marked the 83rd landing of a Falcon 9 booster and the 21st landing attempt on Just Read the Instructions. The droneship will now take the booster back to Port Canaveral to begin a series of inspections ahead of rejoining the fleet.

What a beautiful launch this morning! So clear and calm.

Showing no issues leading up to its 9th flight, Falcon 9 B1051 lifted off at 6:01am EDT and landed a few minutes later, setting itself up to possibly become the first booster to reach 10 flights!https://t.co/g5VaLF6ZcK pic.twitter.com/tjC05MDFxr

Meanwhile, the second stage continued to haul the Starlink stack into its initial parking orbit.  The payload fairings separated 3 minutes 04 seconds into flight and parachuted into the Atlantic where the Shelia Bordelon was standing by to recover them from the water approximately 680 km downrange of the launch site.

As with the first stage, the payload fairing halves on this flight were reused. Both fairing halves previously flew together on the GPS III SV04 mission 185 days ago.

The second stage and Starlink payload reached their initial parking orbit 8 minutes 47 seconds after launch. The second stage then began to coast for about 37 minutes before settling its propellant and reigniting its Mvac engine for one second. Once the second burn was complete, the Falcon 9 was in a 260 x 280 km orbit.

Afterward, the second stage began to spin in preparation for Starlink deployment. The 60 satellites will then deploy from the second stage and drifted apart due to the difference in angular momentum imparted by the spinning rocket stage.

The 60 satellites will now begin to maneuver to reach their 550 km operational orbits.

SpaceX Conducts First Polar Launch from Cape in over 50...