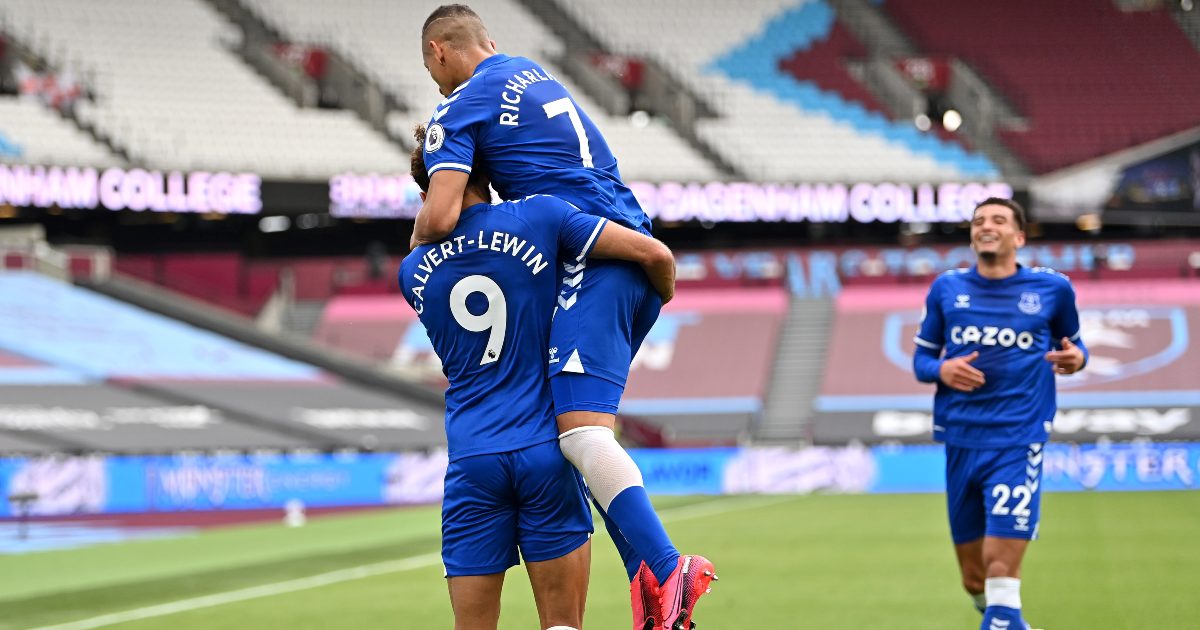 Dominic Calvert-Lewin’s first half winner for Everton dents West Ham’s hopes of finishing in the top-four.

Calvert-Lewin’s first-half strike was enough to secure three points for the Toffees and keep them in the hunt for Europe.

It was Everton’s 11th away win of the season, with only their poor home form preventing them from being in the mix for the top four themselves.

Hammers manager David Moyes turned Everton from relegation candidates to the Champions League in 2005, but his chances of repeating the trick with West Ham are now fading fast.

’s side scored the decisive goal in the 23rd minute through Calvert-Lewin’s 21st of the season.

The England striker latched onto Ben Godfrey’s through-ball and out-paced Craig Dawson before firing low past Lukasz Fabianski into the bottom corner.

Fabianski then had to tip Gylfi Sigurdsson’s free-kick over the crossbar and block a close-range shot from the marauding Richarlison with Everton threatening a second.

attempted to hit back but Said Benrahma’s shot was deflected into the side netting and Jesse Lingard fired too high.

Benrahma has yet to open his goalscoring account since joining the Hammers from Brentford last September, but he should have found the net shortly before half-time.

Pablo Fornals curled in an inviting cross which the unmarked Benrahma met at the far post with a diving header which sailed over the crossbar.

When they did find a way through, Fornals and Michail Antonio combined well on the edge of the box before teeing up Vladimir Coufal, only for his low shot to come back off the inside of the far post.

But with Lingard’s delivery too often letting him down and Antonio unable to get in behind the Everton defence, West Ham could not find an equaliser.

Calvert-Lewin almost set up a second on the counter-attack as he scooped the ball up for substitute Joshua King. Fabianski was beaten but Dawson had managed to get back on the line to block the striker’s header.

Coufal had a chance in stoppage time but lashed his shot wide on a frustrating afternoon for the Hammers, who now look a long shot in the race for the top four.

Lopetegui ready to take down ‘biggest team in the world’...